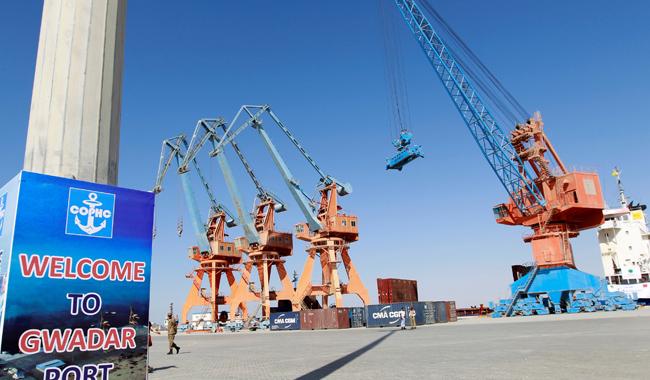 ISLAMABAD: Prime Minister Nawaz Sharif has made it emphatically clear that the enemy of China-Pakistan Economic Corridor (CPEC) is the enemy of Pakistan as the corridor is for the entire Pakistan and no region or province is left out of it.

The prime minister was addressing the historic and grand ceremony of opening of trade activities with the departure of the first mega pilot trade cargo at the world’s largest deep sea port, the Gwadar Port, through the CPEC on Sunday in the presence of top civil and military leadership, including Chief of Army Staff (COAS) General Raheel Sharif, Balochistan Governor Muhammad Khan Achakzai, Chief Minister Sanaullah Zehri and federal ministers.

The premier said the dream of the CPEC project is turning into a reality. He said the milestone was achieved with the efforts of the Pakistan Army.

The prime minister condemned the suicide attack at the Shah Noorani shrine in Hub on Saturday evening earlier where more than 52 pilgrims were killed. Nawaz Sharif said that Pakistan will leave no stone unturned in ensuring that CPEC and all the projects under its umbrella are materialised in time. The prime minister said he was personally committed to Chinese President Xi Jinping’s vision of shared prosperity.

“Today, we have gathered to mark the materialisation of the vision and idea that was conceived only two years ago,” the premier said. He said this day marks the dawn of a new era for the huge population of the whole region. He termed the arrival of the convoy ‘a watershed event’. Nawaz reminded that the CPEC will integrate development and commerce of various regions across Asia and Europe by increasing connectivity and Pakistan Vision 2025. He said that it seeks to transform Pakistan into a regional hub of trade, commerce and manufacturing by harnessing its geo-strategic location into a geo-economic advantage. He said the departure of first major trade cargo from Gwadar Port emphasised Pakistan’s commitment to China’s One Belt-One Road initiative.

“We will leave no stone unturned in ensuring the CPEC and all the projects under its umbrella are materialised within the given time,” he said. “The idea was conceived only two years ago, and this day marks the breaking of the dawn of a new era.

“The newly-constructed roads in Balochistan have opened up new areas that were inaccessible and deprived of development and have brought peace to a volatile region,” the prime minister said.

“The government of Balochistan and the army havebeen successful in making the local population a stakeholder in development. Development can never be sustainable if it creates islands of prosperity. It must reach the lives of those who have remained mired in the trap of poverty and backwardness,” he said.

The premier said the One Belt-One Road project integrates development of various regions. He said it integrates with Pakistan’s Vision 2025 which seeks to transform Pakistan into a hub of trade and commerce, harnessing its geo-strategic location into a geo-economic advantage. He told the gathering that the government had spent Rs49 billion on these projects. Next year, he said, projects worth Rs200 billion will be launched. He said CPEC will help integrate South Asia, China and Central Asia and offer opportunities for people in this region and investors all over the world.

Nawaz termed the historic CPEC project “a world of opportunities,” assuring the sharing of fruits of progress by the neighbouring countries can bring peace and harmony to the whole region. “Efforts of the federal and provincial governments and the Pakistan Army have remained successful in making the people of Balochistan stakeholder in the CPEC,” he said.

The premier said Pakistan was located at the intersection of three engines of growth in Asia as the CPEC will interconnect these engines.

Speaking on the occasion, Chief Minister Balochistan Nawab Sanaullah Zehri welcomed the Chinese mega trade convoy and termed it a landmark in implementing the grand CPEC project. He said Gwadar Port is the base of CPEC, which will bring prosperity to the country and particularly Balochistan.

Zehri said that due to the government’s hectic efforts, the active participation of our security forces and all-out cooperation of the people of Balochistan, we have succeeded in curbing the anti-state elements, and the law and order situation has improved.

Chinese Ambassador to Pakistan Sun Weidong said that the day is very significant that a convoy successfully passed through the western part of Pakistan from north to the south. He said the local people will get job opportunities with the completion of the Gwadar Port. “It proves the connectivity of the local roads and realisation of the concept of one corridor with multiple passages,” he said. The Chinese envoy said that this is the first time that Gwadar Port is exporting containers to overseas destinations. “It proves the port has restored its designed handling capacity,” he said. This is also the first time that Pakistan and China co-organised a trade convoy through Pakistan to the Gwadar Port.

A Chinese company Sino Trans representative said the first trade convoy actualised the connectivity through CPEC. He thanked the Pakistan government and armed forces for providing the best security to the convoy.

In his welcoming remarks, Director General Frontier Works Organisation (FWO) Major General Muhammad Afzal said that CPEC was a classic example of Pakistan-China cooperation under One Belt One Road initiative. He said that the FWO constructed 873 kilometres of highways in Balochistan in two years.

Meanwhile, the government is implementing a project worth Rs25 billion in Gwadar as part of its agenda of priority based development in Balochistan. The project is aimed at developing the Gwadar city under the CPEC keeping in view the city’s strategic importance. Initially, energy and road and railways infrastructure is being improved to meet the energy needs and connect the city with other parts of the country. A 300 megawatts power plant will also be installed to connect the national grid for electricity supply. A new international airport will be constructed, which will ease the traveling of investors and expedite the business activity. The trade convoy departed from Kashgar, China, on Oct 29, entered Pakistan on Oct 30 and reached Gawadar on Nov 12. Chinese vessels were ready at the Gwadar Port for shipment of Chinese goods to Middle East and African countries. The convoys that joined up in Quetta took diverse routes. One convoy came from China, carrying almost 150 containers which were then shifted onto Pakistani trucks at the Sust border crossing south of Khunjerab in the Northern Areas. This convoy, which carried the bulk of the cargoes to be loaded onto the two vessels berthed at Gwadar Port, consisted of trucks as long as 57 feet and travelled down the Karakoram Highway, then turned east towards Jund on the sheer banks of the Indus river about 100km south of Attock. At Jund, it was met by another convoy that originated in Sialkot with 50 trucks carrying around 100 containers and together the whole convoy crossed the Indus River to Kohat where they stayed the night before moving on to Dera Ismail Khan, Zhob and then Quetta, where it stopped for another night. They were joined by a third convoy originating in Lahore and Sialkot, consisting of 45 trucks carrying approximately 90 containers that moved south to Sukkur, then west on the N-65 highway past Sibi and Mastung before joining their companions in Quetta. From Quetta, this convoy moved down the N-85 highway that runs through Kalat and Panjgur to Hoshab where it intersects the M8- highway that runs through Turbat to link up with the Makran coastal highway just east of Gwadar. Two ships Al Hussain Zanzibar and Cosco Wellington are berthed at Gwadar to receive the cargoes. They are setting sail for ports in Bangladesh, Sri Lanka, the UAE and the EU late on Sunday, according to information provided by the FWO. Around Rs35 billion have been spent on road infrastructure for the CPEC projects in Balochistan alone since 2014, said the DG FWO. He said he pushed for the convoys to take these routes to show that the road infrastructure built during this time is fully capable of handling cargo consignments of this size. The government has already allocated land for Gwadar free trade zone and the government has also announced concessions for Gwadar Port and free trade zone in Balochistan.

Moreover, the projects of Exclusive Industrial Park Processing Zone and Mineral Economic Zone are also being executed on priority basis.